Scale-up the production of extracellular vesicles

A FiberCell Hollow Fibre Bioreactor produces large amounts of very concentrated EVs in a space- and time-efficient manner. Practically any type of cell, including mesenchymal stromal cells (MSCs), can be cultured continuously at high density in this system. Serum can be eliminated from the cell compartment and most cell lines adapt easily to simplified protein-free chemically defined media. Yields are so far reported to be 10X to 40X higher compared to static flask batch processing and much higher EV purity is achievable. A number of recent studies indicate that the 3D capillary bioreactor environment generates a proteomic profile and 3D-EVs that appear to be more representative of in vivo secretome, compared to flask culture.

Catering for pilot scale through to production, FiberCell Systems hollow fibre cartridges are available in volumes of 3.5, 20 and 70ml. Fibre surface areas range from 450cm2 to 1.2m2 to permit continuous culturing of as many as 5E+10 cells in a standard incubator. Two cartridges can be operated per Duet pump. The molecular weight cutoff recommended for exosome production is 20 kD but if a more complete cell secretome is required, to include small proteins, then 5 kD cartridges are available.

A FiberCell Hollow Fibre Bioreactor provides a continuous culture process enabling periodic harvesting of large amounts of EVs in small volumes that are convenient for further processing. No passaging is required. Users of this system avoid batch production in cumbersome monolayer culture set-ups and will significantly reduce the amount of plastic waste generated in the lab. Click on the article below to learn more. 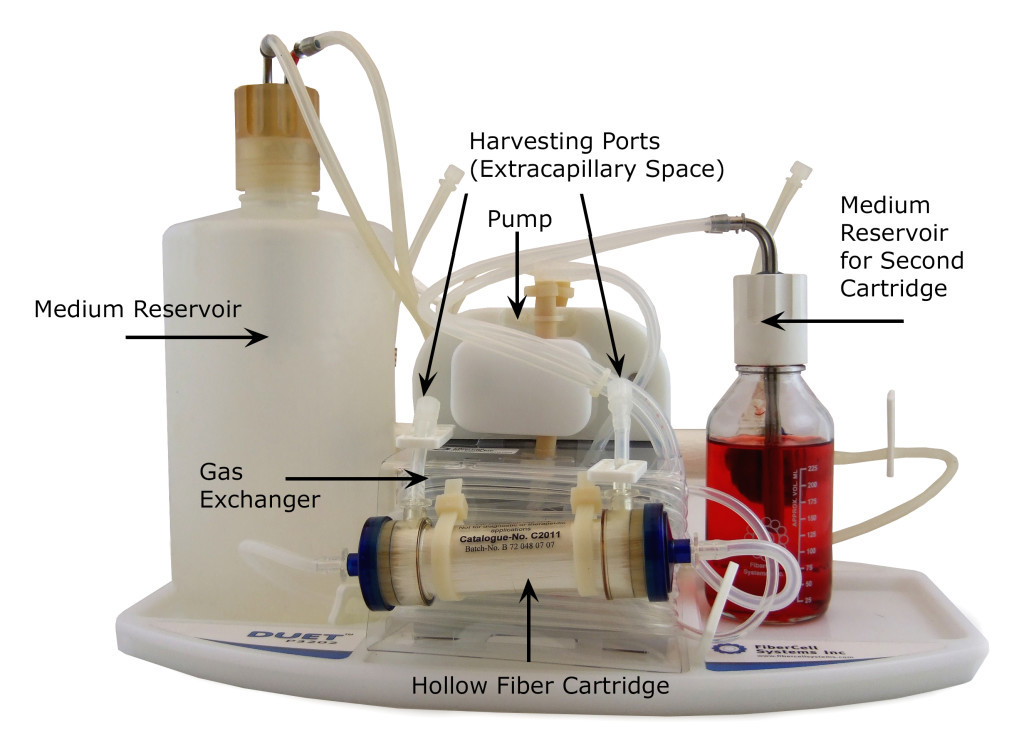 The most common method for extracellular vesicle production requires large numbers of T flasks. Cells are expanded and the final collection performed using only basal medium (without serum), as serum contains significant levels of contaminating endogenous exosomes. This batch-mode protocol can entail a final stage of hundreds of flasks and many litres of medium to process. For large scale production of extracellular vesicles the FiberCell Systems Hollow Fibre Bioreactor represents an efficient alternative. The system generates concentrated extracellular vesicles in a space- and time-efficient manner. Practically any type of cell, including mesenchymal stromal cells (MSCs), can be cultured continuously at high density in a FiberCell bioreactor. Yields are reported to be 10X to 40X higher compared to static flask batch processing and 100X is theoretically possible. Purity is also reported to be much higher than with flask culture. With the FiberCell bioreactor the total amount of EVs produced will depend on the duration of the production run and the size of the cartridge.

The composition and activity of exosomes reflect the physiologic state of the cells from which they are secreted and flask culture is far from physiologic and increasingly seen as not very relevant to in vivo conditions. In a FiberCell Systems bioreactor, on the other hand, cells are continuously maintained at high density around porous fibre capillaries by means of which there is a constant flow of nourishing media and the constant removal of waste metabolites. In this way, cells benefit from much more in-vivo like conditions for extracellular vesicles production. Recent publications suggest that exosomes produced in a FiberCell Systems bioreactor have greater potency than those generated using static flask culture. Also, a number of studies with cancer cells indicate that the 3D capillarised culture environment inside a hollow fibre bioreactor generates a secretome that is more representative of in vivo conditions compared to flask culture (5kD MWCO fibres used in this case). In several recent studies cells have been easily weaned off serum under bioreactor conditions and were shown to grow well using a simplified chemically defined media formulation.

With T-flasks it can take several rounds of splitting and culture expansion to attain a final production cell-mass. There can also be technical challenges such as the problem of cells undergoing apoptosis just prior to harvest, contaminating it with difficult-to-remove membrane fragments and protein aggregates.

In conclusion, when compared to the FiberCell Bioreactor, T-flasks are very wasteful in plasticware, more time and space consuming and provide culture conditions with only tenuous relevance to the way cells actually grow in vivo. The FiberCell Systems bioreactor on the other hand provides a way to create a high cell density in vitro model for the purposes of EV production and can be operated completely free of serum for many types of cell. It therefore represents a powerful alternative method to to improve the quality of EVs and enhance laboratory production efficiency.

Flasks were split 1:5 in DMEM/10% FBS until a total of 130 T225 flasks were obtained. DMEM/10% FBS was replaced with DMEM alone and exosomes collected after 2 days.

Total exosomes collected from two HFBR under these conditions equalled that from 3600x T225 flasks in a total volume of 360 mL.

Example: Scaling up production of engineered exosomes from 293T cells